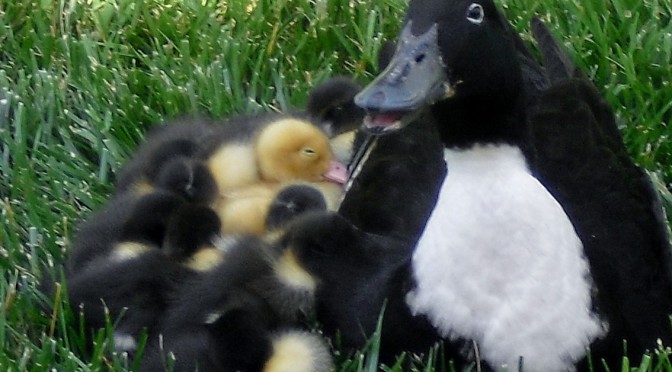 On a warm Summer Day, a family of resident ducks went for a stroll. This duck family needed help from the Fire Department before the day was done.

Our new neighborhood has a community pond that has been adopted as a home base for several families of ducks.  Some are mallards with their beautiful green necks.

Some are domestic ducks.  They come in all color combinations.  The black ones with white necks and chests remind me of penguins as the drakes waddle along, typically in a group.

One of the black hens with white markings we named Henrietta.  Every day, she brought her brood of ducklings to rest under the red maple beside our sunroom.  We had a front row seat to watch the ducklings grow from day to day.  We gave them fresh water, but took feed to the pond each day. 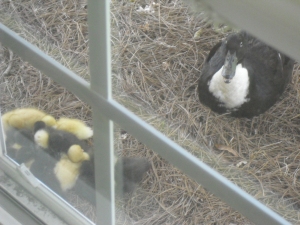 The ducks wander about during the day throughout the streets of the community when they aren’t swimming at the pond.  Ducks are monogamous during one mating season, but  may choose another mate the next season.  When the ducklings are very small, the drake stays nearby for a short time.

After a duck was killed by a car, the homeowner’s association installed speed bumps in the neighborhood to slow down the traffic and they moniter speed to keep our community safe for children, walkers and ducks..

Some of the ducks have markings like abstract paintings with varied patterns of brown, tan, cinnamon and white stripes… some have a formal looking tweedy vest, and some have black  polka dots on their white chests. 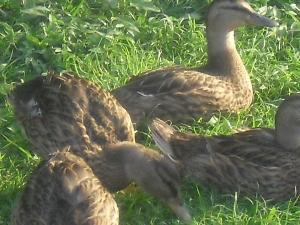 Some of the brown mature ducks have a navy blue stripe on the sides of their  wings. The baby ducklings are various shades of black and white and brown….with tiny black bills.  Some have yellow on their necks and upper breast when they are young.

Occasionally mixed into with a large brood, there are 2-3 butter yellow baby ducklings with orange bills and orange  webbed feet.. They are storybook gorgeous.  My husband names them Marilyns.  They seemed to be the first to disappear.  I wonder if large predator birds or turtles can see them easier? 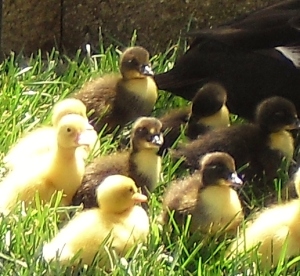 Mother ducks would never be accused of neglect.  Ducklings stay with their mothers for 6-8 weeks, trailing along after her.  When they are small, they gather under mother’s body, so 18 or more can be completely hidden.

As they grow in later weeks, the mother hen hustles to stay up with them, but she keeps them together.  They continue to sleep a lot when young and to sleep in a heap touching one another.

I noticed that only a small percentage of the ducklings tended to survive …. maybe 5 or 6 only from large litters of 18 and 21.   An internet check revealed that this is typical for wild ducks.

One  afternoon this Summer,  Ethyl and her brood went for a fateful stroll… The ducklings veered off the sidewalk  to the edge of the street, and one by one, followed their siblings  down the sewer drain.  An alert neighbor called the fire department and Engine 28 responded…our heroes to the rescue.

I snapped a picture of one of the fireman with his arms and torso stretched down inside the drain as he searched for the ducklings..

Success!  He kept at it until he retrieved all but one of the ducklings.. and they were pulled out to safety and an anxious mother duck..

The duck family was  soon on its way back to Spring Park pond, apparently none the worse for the experience in the sewer.

The neighbors expressed their gratitude to the Fireman for the rescue.   I sent them some tomatoes from the garden, with a pound of bacon, to make bacon and tomato sandwiches for their lunch in the Firehouse .

And the ducks went on their way back to Spring Park Pond. 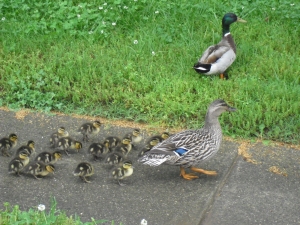 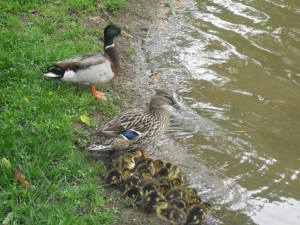 I have enjoyed careers as a nurse, developmental psychologist, family therapist, University Professor and Dean of the College of Health and Human Services. I retired from full-time academic work and am now actively engaged in new experiences as a free-lance writer. Publications include articles on theoretical inquiry, health issues, health policy, marriage and family, adolescents, food. It's a joy to interact with friends and new acquaintances on issues of women living full and interesting lives after 50. It's a good day when I can learn something new. Sue Marquis Bishop, PhD

A daily selection of the best content published on WordPress, collected for you by humans who love to read.

An Older Woman and Her Art

Walk and Bike in France and Europe www.walk-bike-camino.com

This and That Continued

The One Thing I know For Sure

A soft place to fall, some poetry, some stories some random thoughts but most of all a place that I hope blesses those who stop by.