MAKING TOMATO MARMALADE is a richly rewarding way to approach the end of the tomato season.  AND… jars of this homemade jewel of a sweet treat make fabulous holiday gifts.

WE HAVE ENJOYED EVERY DAY of the long tomato season this Summer with a bounty of tomatoes, from only eight tomato plants.  We have eaten our fill of bacon and tomato sandwiches, stewed tomatoes, tomato sauce, tomato salsa and chutney and more.  Today, I made a simple  lunch with tuna salad and tomato. 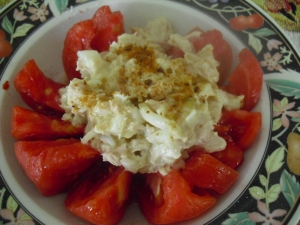 TWO YEARS AGO, when our daughter Heather spent a week with us in our cabin in the North Carolina mountains, she asked if I would show her how to make jelly or jam.  We had just purchased some large candy stripe tomatoes from the farmer’s market in Burnsville. The tomatoes were  mustard yellow, with narrow  ruby-red stripes that were, widely spaced around the tomatoes from stem to bottom. I hadn’t made any jellies or  jams for a few years and didn’t have any old recipes with me.  So, we created a new recipe using these wonderful tomatoes.

THE CANDY STRIPE TOMATO MARMALADE we made not only tasted fantastic, but the deep yellow and red colors in the jar were striking. We only made 6 jars and hoarded them for ourselves, bringing out a taste when company came.  Heather tried to take her 3 jars home on the plane and they wouldn’t let her board with them, so she mailed her jars to her house

I DIDN’T HAVE any candy stripe tomatoes this year, but did have several red varieties, so I used our same recipe with red tomatoes and named this version Carolina Tomato Marmalade. (The recipe can be doubled with good results. )

WASH AND STERILIZE jam or jelly jars.  Leave lids and rings in hot gently boiling water until use. Leave jars in hot dishwasher after washing until use or sterilize in boiling water. . 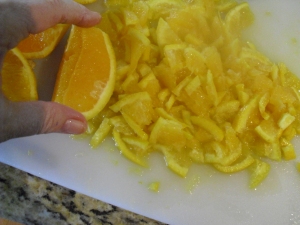 Bring to boil and reduce to gentle simmer until liquid is reducd and lemon and orange slices are translucent, tender and “candied”.  Stir often to prevent burning.  Remove from heat.  Remove cloves, cinnamon stick and discard.

WHILE LEMONS AND ORANGE MIXTURE is simmering, prepare tomato mixture.

WASH AND IMMERSE TOMATOES in boiling water for 30 seconds to loosen skins so they will peel off easily.

DISCARD PEELING and cut tomatoes in 4-8 pieces. In large pan, add tomatoes, butter and pectin and stir to mix well.  (Use of pectin will decrease amount of foam to be skimmed off later.)  Leave pan off heat for 10 minutes.

TURN HEAT TO MEDIUM TO MEDIUM-HIGH.  Add candied lemon and orange mixture from small saucepan. Add 1/2 cup orange juice, ground cinnamon, ground ginger, ground allspice and black pepper.  Let it boil (low boil) until it begins to get thick, about 20-30 minutes. (We found it took longer to thicken in the high altitude of the mountains.) You can check how it is thickening, by adding a teaspoonful in a small dish and cooling it, or seeing it flow off the spoon in a thicker sheet (as opposed to a single drip).

WHEN IT BEGINS TO THICKEN, remove from heat and skim off foam on top with a metal spoon.

FILL JARS leaving 1/8 inch at top.  Wipe sides and top edges of jar to remove any spillage and tighten lids and rings.  Move jars to deep pot on stove and till with water 1-2 inches over the tops of the jars.  Place cover on pan and bring to boil.  Boil for 10 minutes. 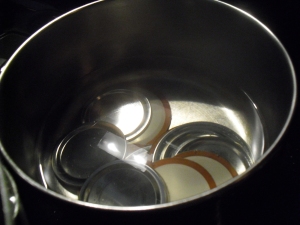 THIS CANNING POT allowed the lowering of the jars into the water on a rack.  When we made it in the mountains, we did not have a canning pot, but used a deep pan.

SET PAN OFF HEAT and allow to cool. When jars are cool, check lids and rings.  Lids are sealed when center of lid is pushed down and will not release up. The Carolina Tomato Marmalade was a deep burgundy color with pieces of yellow lemon and orange rinds visible among the tomato seeds.  Lovely! 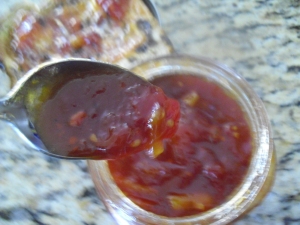 I PREPARED A SIMPLE dinner of  ham, mashed potatoes and green beans,  and made biscuits for dinner, so we could enjoy the new treat.  My Dad so loved tomato preserves. As I put the biscuits in the oven, I thought of how Dad would have enjoyed this dinner, ..and I remembered the day my daughter and I created the tomato marmalade recipe.  Such warm memories make my life that much richer.

5 thoughts on “What is Carolina Tomato Marmalade? A Delicacy of the Tomato Season”

I have enjoyed careers as a nurse, developmental psychologist, family therapist, University Professor and Dean of the College of Health and Human Services. I retired from full-time academic work and am now actively engaged in new experiences as a free-lance writer. Publications include articles on theoretical inquiry, health issues, health policy, marriage and family, adolescents, food. It's a joy to interact with friends and new acquaintances on issues of women living full and interesting lives after 50. It's a good day when I can learn something new. Sue Marquis Bishop, PhD

A daily selection of the best content published on WordPress, collected for you by humans who love to read.

Daring fiction - from crime to satire and everything in between

An Older Woman and Her Art

Walk and Bike in France and Europe www.walk-bike-camino.com

This and That Continued

The One Thing I know For Sure

A soft place to fall, some poetry, some stories some random thoughts but most of all a place that I hope blesses those who stop by.